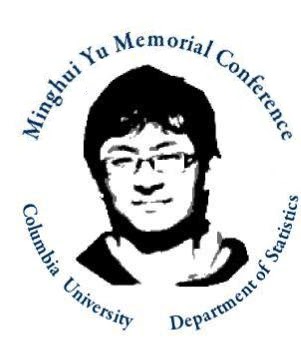 Taking place every April since 2009, our doctoral students organize the Minghui Yu Memorial Conference. The conference features talks by keynotes speakers and students just beginning a research program to those who are about to defend dissertations. This event is also an occasion to remember our friend and colleague, Minghui Yu, and an opportunity to learn about exciting new research areas emerging from our department.

Minghui was born in Shandong, China in 1983. In 2002, he entered the Special Class for the Gifted Young at the University of Science and Technology of China (USTC), one of the most prestigious universities in China. Minghui possessed the rare quality of being not only smart, but also diligent, versatile, modest, and easy-going. He was the type of friend who would stand by you no matter the situation. Minghui breezed through the challenging undergraduate program at USTC, ranking at the top of his class. Minghui was well-liked by his fellow students having served as the class president from his sophomore year. Although under enormous academic pressure, he still found time to organize a series of student activities, such as hiking, art performances, and athletic contests for his fellow students.

After graduating summa cum laude in 2006 from USTC, Minghui entered the Ph.D. program at the Physics Department of Columbia University. After one year, he transferred to the doctorate program in statistics. During his time at Columbia, Minghui served as the public relations head of the Columbia University’s Chinese Students and Scholars Association (2007-2008) and was a member of the Columbia Chinese Basketball Association and the Columbia Graduate Student Consulting Club. His biography on the CUCSSA website mentioned his love of ”movies, photography and delicacies”. Minghui described himself in his blog as ”a boy who wants to combine art and science together”.

On April 4, 2008, after attending a student-organized conference, Minghui escorted his girlfriend home on the west side of campus. On his return, he was accosted by juveniles as he was crossing 122nd and Broadway and in his attempt to flee, he was struck by an automobile on Broadway. Minghui was taken to St. Luke’s Hospital where he passed away a short time later.