While statistical research at Columbia predates the 1930s, the statistics department was officially formed in 1946. Since that time, the department has ebbed and flowed, and its very existence was sometimes threatened.  Throughout, faculty and graduates from Columbia have made important contributions to the discipline, often through innovative interdisciplinary research motivated by real world problems.  That tradition continues to this day, with researchers working on problems in a variety of areas, especially problems generated by the need to make sense of large, noisy data sets. 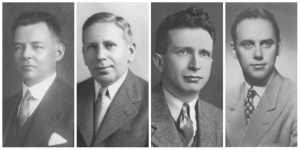 Founding members of THE Statistics Department at Columbia UNIVERSITY: Hotelling, Wald, Wolfowitz and Anderson. Even though Hotelling left before the department was officially established, we included him here as he was so instrumental for the developments at Columbia that led to the creation of the department. 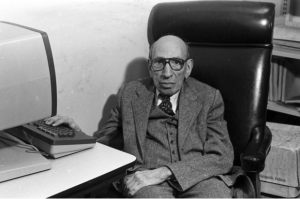 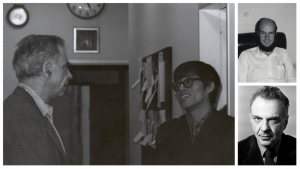 Photographic memories from the 70s and 80s. Left: Robbins and Lai in the departmental office. Right: photos of Siegmund and Robbins from the 70s. 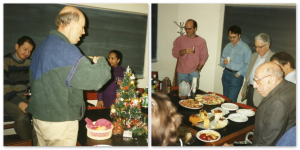 Holiday party during Meier’s visit in 1991 or 1992. From left to right in the two panels: de la Peña, Heyde, DOOD, Civtanic, Spivak, Meier, Lo and Levene. 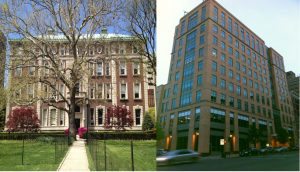 The department ran into space issues in the late 60s and was gradually moved to the Mathematics building between 1968 and 1971. Due to another wave of rapid growth after 2000, in 2004, the department still part of the Graduate School of Arts and Sciences, moved to its current location in Columbia’s new building for the School of Social Work.

Listed below are articles and related links pertaining to the history of the Department of Statistics at Columbia University.

For a comprehensive history of the department, please view our History of the Department of Statistics at Columbia University.

“To differentiate its purpose from the widely held perception that statistics was primarily about data collection and analysis by means of conventional methods,  the new department was named Mathematical Statistics, referring  to a scientific discipline that focused more on developing new methodology using sophisticated mathematics. The new department had three founding members: Wald, Jacob Wolfowitz and Theodore W. Anderson. As more and more departments of Statistics were formed in the country, in November, 1982, Columbia decided to change its name to the simpler Department of Statistics.”

“The first female PhD graduate was Rosedith Sitgreaves in 1952, who worked with T. W. Anderson on the behavior of classification procedures. Sitgreaves remained in academia until her retirement in 1981 and held professorships at Stanford, Columbia Teachers College, and California State University.”

“The Department has grown considerably in recent years. Enrollments in undergraduate and graduate classes have grown dramatically as have demands for statistical collaborations from around the campus.”

“The Department has secured a position as one of the key science departments at Columbia and looks forward to making vital contributions at the forefront of statistical research as the discipline evolves in the coming decades.”