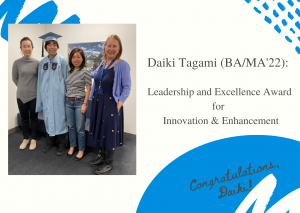 Daiki’s selection as an honoree is a testament to the outstanding impact he’s had on his peers, the campus, and other communities he has served.

On behalf of the Department of Statistics, join us, as we congratulate Daiki.

“I first heard about Daiki when he was a high school senior in Japan and I was serving on the Rabi Scholar Committee. He was amazingly energetic and productive even by the usual superbly high standards on the best Rabi applicants who I reviewed over the years. He made a splash in Japan with his totally original and independent mosquito research work. He did this work in his home, building the equipment himself. He became an expert on mosquitoes and actually served on panels with senior research scientists. A video of his work received hundreds of thousands of hits around the world. He did this work while also excelling in his studies, extracurricular activities, and community service.

Daiki will be graduating in June with both an BA and MA in Statistics from Columbia. He has taken four PhD courses, written a joint paper with Professor Sumit Mukherjee, and has worked on multiple research projects while an undergrad. These include projects at the Columbia Mind Brain Institute, the Center for Theoretical Neuroscience, a joint Columbia project with the Memorial Sloan Kettering Research Institute, and at the Center for Digital Scholarship at Brown University. He has also continued with his commitment to community service while at Columbia, devoting many hours of his time. For example he volunteers at a local hospital helping patients” – Professor Mark Brown

“Since the Spring 2020 semester, Daiki has been the Lab Lead for the python labs that are a component of my course titled “Statistical Thinking for Data Science with Python Labs.”

When I first met Daiki to discuss the possibility of taking on this role, I was impressed with his level of passion and enthusiasm for statistics, for learning and for teaching. Over the next few months, it became very clear to me that I was mentoring a young man who would someday be one of the great contributors to the field of statistics and statistical education.

Initially, two of his characteristics that stood out to me are his brilliance and bravery. As a 20-year old undergraduate, he was challenged with developing and teaching a university class. He took on the challenge with such focus, maturity, and determination.

He put a tremendous amount of work into the development and teaching of each lab session. He developed the course material including coding notebooks, lab assignments and projects. He taught each lab session with clarity and enthusiasm. It was clear from observing him in the classroom and from student evaluations that the students loved and admired him. Many students commented that they could not believe that he was still an undergraduate student.

However, Daiki’s ability goes well beyond being a great teacher alone. When I asked him to put together an example project with an analysis report for the students, he returned with an excellent paper related to COVID-19 and racial disparities. When I asked him to work with me on a survival analysis for a doctor at Memorial Sloan Kettering, he excelled even though this was the first time he did this type of consulting work. He attended meetings, understanding when to voice his opinion and when to simply listen. He discovered many database issues and completed an excellent survival analysis to be published in a journal article. He is quite simply a brilliant young man!

In the work he has done on my course alone, Daiki has contributed immensely to the Columbia campus and its students. His reward for Leadership and Excellence is well-deserved.” – Professor Anthony Donoghue