Columbia is best reached from the south by taking the 95/96th Street exit off the Henry Hudson Parkway (West Side Highway). Use the 95th Street off ramp and turn left onto Broadway. Turn left onto 115th Street.  Watson Hall is in the middle of the block on the left (south) side.

To reach the Henry Hudson Parkway:

From the south and west:

Parking garages: in Riverside Church (on 120th Street between Claremont Avenue and Riverside Drive) or on 114th street close to Amsterdam avenue. Occasionally, street parking can be found in the neighborhood.

Directions By Train or Bus

Train service in New York arrives at Grand Central or Pennsylvania Station; bus service arrives at the Port Authority Bus Terminal. From any of these, you can take public transportation or a taxi north to the Columbia campus.

Five bus lines (M4, M11, M5, M60, M104) and one subway line (the Broadway IRT #1 local) serve the Columbia/Morningside Heights area. If you find yourself on the Broadway IRT #2 express or #3 express, be certain to change for the #1 local train at 96th Street. The Columbia stop is 116th Street. 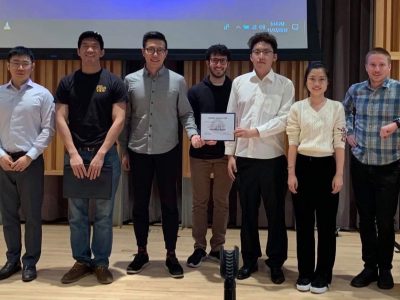 The DataFest Fall 2019 findings were presented on the topic of religiosity by six teams. Each team developed robust models and analyzed the dataset. The...

Watch interviews of current students and alumni about their experience in the MA Statistics program at Columbia.

Watch interviews of faculty about their courses in the MA Statistics Program at Columbia.